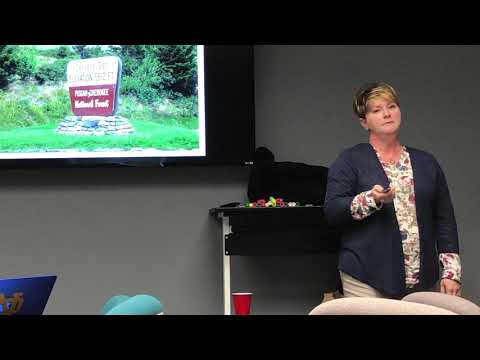 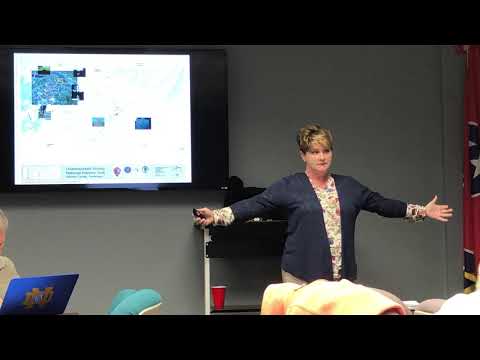 The name of the new section? Patriot’s Park, 15 acres that is to pay homage to both the October 1780 Revolutionary War battle to which folks followed the trail and the mascot of Sullivan East High and the under-construction Sullivan East Middle. A group called Destination by Design has worked on conceptual plans for the proposed park, including a rustic path and an outdoor amphitheater of boulders and earth, like Fort Womack on the Childress-McClellan family farm nearby in Sullivan County on Silver Grove Road.

In a presentation Jan. 31 to the Sullivan County Board of Education, later to be repeated to the Sullivan County Commission, Torbett explained some of the tentative plans for the trail, overseen by the National Park Service. She first got wind of the possibilities about a decade ago at a regional trails workshop, and now that Sullivan East Middle is being built near Sullivan East, part of the trail may be adjoining the campus on 15 acres that will be owned by the school system.

“I’ve been going at this since 2008,” Torbett told the school board. A master plan with a $100,000 grant from the National Park Service has been helped with $7,000 from Sullivan County toward the project, which already has conceptual maps.

The historic trail was created by Congress in 1980, marking where more than 1,000 people went some 330 miles in 15 days from what is now the greater Tri-Cities to join forces near Quaker Meadows, which is near Morganton, North Carolina. Local folks gathered near Abingdon, where the Overmountain Trail will connect with the Creeper Trail, on a route that follows the Old Watauga Road. At that time, Sycamore Shoals was Fort Watauga and the folks from this region ended up near Kings Mountain to defeat the British there.

Already in the Bluff City area, two segments of the trail are near the swinging foot bridge in Bluff City. Only sidewalk improvements mark the trail in Bluff City, but the trail also goes through Carter County and the Abingdon area of Washington County, Virginia.

The Overmountain Victory Trail Association does a storytelling and history event, an annual Heritage Day, each September at Bluff City Middle, retelling how local folks gathered at the Pemberton Oak to make the trek along the trail ultimately ending at King’s Mountain. Literally, Torbett said, the trail went through the football field at Bluff City Middle.

Already, Eagle Scouts have put up a split-rail fence in Bluff City along the trail. Tentative plans are to extend the trail formally to Sullivan East High School, near East Middle that is to open in January of 2020, and Rocky Mount, the territorial capital of Tennessee in Piney Flats.

At a likely crossing of Weaver Pike and Pleasant Grove Road would be a proposed four-mile segment, including a tunnel to reach Patriot’s Park from East High. Also, the tent-camping side of Observation Knob Park would include the Overmountain Victory Trail, too. In addition to the Creeper Trail, Torbett said the new historic trail sections would connect with the Appalachian Trail and the Tweetsie Trail.

The Rocky Mount Chapter of the Overmountain Victory National History Trail has a Facebook page.

OVT - Abingdon to Elizabethton from Destination by Design on Vimeo.