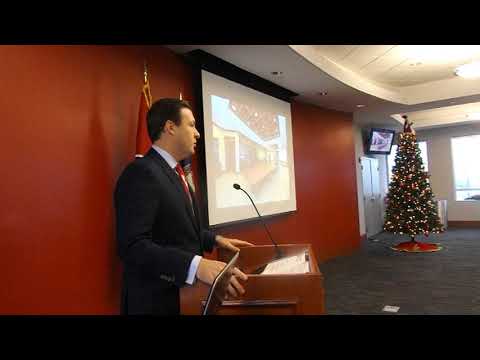 BRISTOL, Tenn. – Regional business and government leaders from Northeast Tennessee and Southwest Virginia kicked off their push Thursday to convince the federal government to bring 620 jobs to the former Alpha Natural Resources headquarters.

U.S. Secretary of Agriculture Sonny Perdue announced last August that the department’s Economic Research Service and the National Institute of Food and Agriculture would be moving out of Washington, D.C., and 35 states expressed interest in taking them.

“We want to get these folks out of D.C. and to where agriculture actually occurs. … We think we have a decent shot, but who knows?” Jason Berry, county administrator of Washington County, Virginia, said during a Bristol Motor Speedway event to “Bring USDA to Bristol.”

Does our region have a shot at this opportunity?

In his filing with the federal government, Berry argues the former Alpha Natural Resources location has access to mid-Atlantic and Southeastern population centers and is within a half-day’s drive of 18 universities, eight state capitals and Washington, D.C. More than a dozen businesses and organizations — including Eastman, Virginia Tech, Ballad Health, Food City, East Tennessee State University and Powell Valley National Bank — have written letters supporting the relocation.

What are the qualities of the former Alpha Natural Resources property?

The 130,000-square-foot main building — located off Interstate 81’s Exit 7 between Bristol, Virginia, and Abingdon — is less than 10 years old and is move-in ready.

“It was built with security in mind,” said Fred McClellan, the representative agent for the building. “It also has a lot of amenities inside, including the technology and distance-learning space.”

Economic development incentives are available for capital and operating cost reductions. The federal government specified it needed 160,000 square feet of space, according to Berry. “(The building) can be added onto,” Berry added. The building’s current owner, said McClellan, is United Gulf Coast Construction based in Kuwait. “They bought the property for the quality of the structure,” McClellan pointed out.

“You could drop Google or Microsoft into that building and they would fit right in,” said Virginia Delegate Israel O’Quinn, R-Bristol.

The property also has access to hiking and biking trails.

What would be the relocation’s economic impact?

“The folks relocating would keep their D.C. pay … it’s about a 28-percent premium to pay federal employees elsewhere in the U.S. Conservatively, you’re looking at a payroll of about $60 million,” said Berry.

A Sperling’s Cost of Living comparison for someone making $90,000 annually indicates that area of Washington County, Virginia, would be 48 percent cheaper than Washington.

What’s the timeline for a decision?

“The decision, according to Secretary Perdue, is sometime in January with the idea that if Congress appropriates the funds for relocation, the move would occur Oct. 1, 2019, the start of the federal fiscal year,” Berry said.