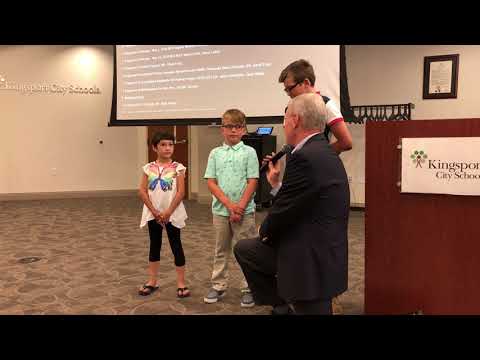 Kingsport Board of Education


Interim Dobyns-Bennett entrance to be made more secure

The BOE at its regular meeting Thursday evening voted to enter into a contract with architect James Wright for $3,500 to design a secure area for D-B’s career technical education entrance, which will continue to serve as the main entrance of the school for at least much of the 2018-19 school year.

The board also approved purchasing more than 2,220 Acer C731 Chromebooks for a little more than $527,000, part of the school system’s rotational plan have a 1-to-1 ratio of devices to students in grades 4-12.

And on a consent agenda item, the board approved what amounts to a free year of Chinese instruction for Kingsport City Schools through a program with Middle Tennessee State University, which offered to provide one teacher at no charge instead of the regular $27,000 a year for an instructor. That program began in 2013 through another university.

WHAT ABOUT THE MUSIC BUILDING ENTRANCE?

KCS Chief Financial Officer David Frye said the CTE entrance improvements should cost about $25,000 to $30,000 and be handled with existing funding. He said a secure area will be made adjacent to the entrance, which is the front door to D-B until a $20 million Regional Science and Technology Center is completed, expected as early as the spring of 2019. The CTE entrance has a magnetic door, opened by someone monitoring a doorbell and camera from inside during the school day, but Frye said the secure area would be used even after it is no longer the main entrance.

BOE member Todd Golden asked about the music building entrance, located across a covered area from the CTE entrance, being secured too. Frye said that those doors are supposed to remain closed and locked during the school day with students having access with cards. Originally, Frye said, the school system had hoped to enclose the walkway but that it is a pass-through and once had a power line easement with Kingsport Power. The clincher, he said, is that it still has a water and sewer easement with the city.

Superintendent Jeff Moorhouse said a continuing conversation focuses on the security of the music building as well as legitimate reasons band parents and others might have to enter it during the school day. The vote was 3-0 with Karen Reed-Wright, who is married to the architect, recusing herself, and Carrie Upshaw absent.

WHY ARE NO CHROMEBOOK COVERS INCLUDED?

The board also voted 4-0 to approve the purchase of 2,225 devices for $527,325 from low bidder Firefly. KCS Technology Supervisor Scott Pierce said the contract includes no cases but that those will be purchased in July or August in time for the start of school. Last year, he said, the low bid some in at $234 per Chromebook with a case but that cases have become more expensive.

A Mandarin Chinese instructor whose work visa remains up to date will stay with the school system as planned for the 2018-19 school year, BOE President Susan Lodal and Moorhouse said. However, two others whose work visas expired will return to China and not be replaced. The system had offered Chinese at the middle and high school levels.

The board cited financial constraints when announcing the MTSU offer during a budget meeting.  Moorhouse said the decision on the program for the future will be made in the 2019-20 budget. Other 2018-19 cuts to balance the budget included doing away with the driver’s education program at D-B, and the system also increased tuition for out-of-district students.