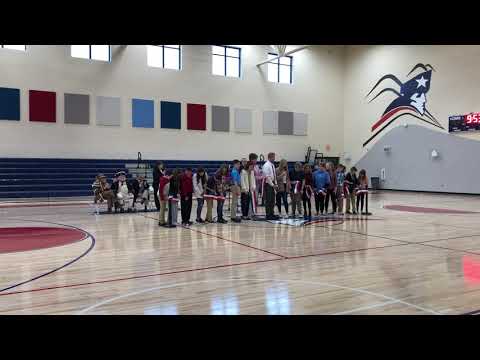 BLUFF CITY — With a nod to local Revolutionary War history from nearly 240 years ago, thanks to community and political support of new schools and a hopeful eye toward current and future students, Sullivan County Schools on Tuesday held the ribbon cutting for the first new county school since 1980.

Sullivan East Middle School is the first new school building in the Sullivan East High zone since the high school opened in 1968, although Emmett Elementary had a major renovation and new section added in the 1990s.

The new facility, and home of the Patriots, on Weaver Pike opened Jan. 7 as the merger of Bluff City and Holston Valley middle schools and the middle school portion of Mary Hughes, which was a grades K-8 facility. East Middle held a community open house Jan. 6, but Tuesday marked the formal ribbon cutting at the campus of about 650 students in grades 6-8.

Features of the $20 million-plus school include a two-story front porch with a panoramic view of South Holston Mountain as well as a cafeteria that is linked to a study commons, otherwise known as a library, via two interior garage doors.

HOW DID SCHOOL COME TO BE?

“What seemed to some as impossible was made possible by the staff of Sullivan East Middle School,” former Director of Schools Evelyn Rafalowski said, thanking a contingent of folks for their work on and support of the project, including the County Commission and Board of Education, for their “vision and willingness to channel resources for education.”

BOE Chairman Michael Hughes said the groundbreaking for the project 824 days ago in a field was a stark contrast to the 21st century building. It was funded using some of the $140 million in countywide bonds which were shared with the Kingsport; Bristol, Tennessee; and Johnson City school systems.

The county’s other new project, the $60 million-plus West Ridge High School near Tri-Cities Airport, is set to open in August 2021.

“Good is the enemy of great,” Sullivan County Mayor Richard Venable told eighth-graders and others gathered in the gym for the ribbon cutting.

“You students, parents, teachers and administrators can make this school great,” Venable said. “It’s been a long road from some six years ago.”

He recalled meetings to gauge community and local political support for the new schools. He also said some commissioners lost jobs they loved in an election after voting to support the schools.

Principal Greg Stallcup, who thanked Assistant Principals Sabrina King and Hank Hare, said the school has about 650 students, which is slightly more than projected.

“We opened with a few more than anticipated,” Stallcup said. “It was designed with room to grow.”

Before the groundbreaking, five Boy Scouts of America Troop 4 in Piney Flats received patches from the Overmountain Victory Trail Association for visiting at least five historic sites related to the trail. The National Park Service’s official trail route goes onto the campus of the former Bluff City Middle, and next year an NPS trail marker will be added to the site.

Director of Schools David Cox, reading from a text prepared by county planning director Ambre Torbett, said the frontiersmen marched through the “foothills of Holston Mountain and along the pathway to freedom.”

The Overmountain Men, a group of frontiersmen known as Patriots from what was Fincastle County, Va., but eventually became Sullivan County, set out on Sept. 24, 1780. The story goes that the group mustered at the Pemberton Oak close to Bluff City and traveled to the Battle of Kings Mountain on the North Carolina-South Carolina line. The one-hour battle, according to founding father Thomas Jefferson, turned the tide of the Revolutionary War against Great Britain in favor of the United States.

Sixth-grader Addison Fagley won an essay contest, writing about what she liked about being in the first group of students to attend the new school.