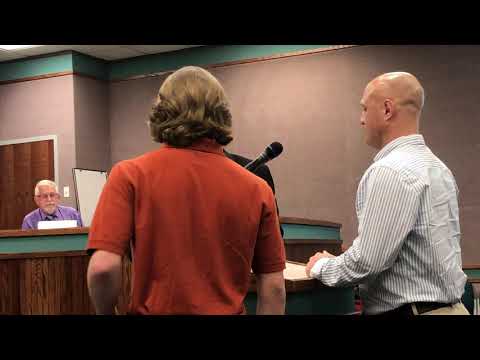 BLOUNTVILLE — Sullivan County’s school board has voted to fund a purchase of 15.23 acres adjacent to Sullivan East Middle School, something it agreed by contract to buy on a delayed basis almost three years ago.

The land is to become the home of Patriot Park, a proposed part of the Overmountain Victory National Historic Trail through the National Park Service, although the Board of Education has not formally approved that use.

However, three of the seven board members did not support the vote Thursday night, and the 24-member County Commission still must approve the appropriation of $416,000 from the school system’s restricted reserve. Another $10,000 was paid as earnest money for the purchase in May 2017, along with $1.75 million for the roughly 54 acres for the middle school campus.

East Middle opened Jan. 7, taking in students from the former Bluff City Middle, Holston Valley Middle and the middle school portion of Mary Hughes, a K-8 school. As previously reported, the board voted Feb. 6 to declare Bluff City and Holston Valley middle schools and the old Holston Institute near Blountville as surplus and voted Thursday to sell those properties via sealed bid.

BOE member Matthew Spivey, an attorney, told the board that if the East Middle purchase is not approved, land owner Ike Fleenor could sue for breach of contract. BOE Chairman Michael Hughes said that the entire amount of 69.41 acres, was an “all or nothing” buy. School board attorney Pat Hull said he understood that Fleenor kept some cattle on the land in question.

“We’re just making two payments,” Hughes said before the vote. “There was no opportunity just to buy this or that.”

However, board member Mark Ireson said since the land is not to be used for a school, he thought maybe the money could be used for other pressing needs, although funds from the restricted reserves are earmarked for the sole purpose of buying the 15.23 acres.

The board voted 4-1 with two abstentions to request the County Commission approve using the reserve funds to buy the remaining land per the contract. Voting for the proposal were Hughes of Hickory Tree, Vice Chairman Randall Jones of Indian Springs, Randall Gilmore of Blountville and Spivey of Kingsport. Mark Ireson of Colonial Heights and Jane Thomas of the Bluff City area abstained, while Paul Robinson of Bloomingdale voted no.

In other action, the BOE:

— Discussed, during a work session before the meeting, an idea from high school principals to revisit a decision about three years ago to do away with final exam exemptions for students with perfect or near-perfect attendance. The old policy was students with a 3.5 grade point average or no more than two absences per semester were exempt from final exams, but starting in 2018-19 that exemption went away.

Director of Schools David Cox said that while habitual truancy and absenteeism are down, overall absenteeism is up slightly. He said the concern is that more “senior lay out days” are popping up since all students, even those with straight A’s and perfect or near perfect attendance, still must take final exams.

However, Ireson said he’d like to see a middle ground because he is concerned high school students are not prepared for final comprehensive exams in college if they can opt out of final exams. He said he’s had parents of Sullivan County graduates approach him about the matter and has seen it firsthand.

Ireson and Thomas in the meeting and the work session beforehand questioned if the land on the southern end of the property was “unbuildable,” with Ireson saying he had thought until recently it was to be used for a possible new elementary school next to the middle school.

Hughes said the land is buildable but the school board chose not to build there. The potential new elementary would be on the northern side of the middle school.