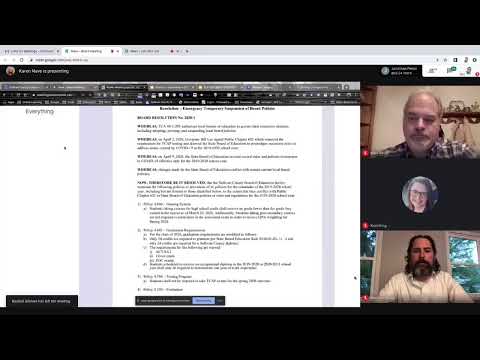 BLOUNTVILLE —  Sullivan County’s school board has voted to renew the four-year contract of Director of Schools David Cox, extending it another year, as well as make changes in polices for the novel coronavirus pandemic via recent action of the Tennessee school board.

It also got an update on efforts to figure out a path forward for some sort of high school graduation and approved the adoption of English language arts textbooks and curriculum for grades K-12.

The Board of Education, meeting in regular session online as allowed by a governor’s order because of the pandemic, renewed the contract so that it expire June 30, 2024, rather than that date in 2023. It ties his raises to what teachers get each year, as the first contract did, and says he will get the maximum allowable $10,000 reimbursement in moving expenses for moving from Maryland.

The vote was taken despite member Mark Ireson’s concerns about the need to take the action so early in the Cox contract approved last year. “I just don’t understand why we’re doing it so fast,” Ireson said.

Matthew Spivey said the vote would “lock up somebody who we think has done a great job,”  while Ireson said Cox still had more than three years left on his first contract. “I just don’t understand why we’re doing it so fast.”

Cox said that next week, principals will begin getting input from student leaders on their thoughts about graduation, which Cox said could not occur in person in May. He said graduation is one of his favorite things as an educator, with students getting to celebrate their 13 years in school with a diploma and recognition.

However, he said that such mass gatherings are the last of three phases of events to be allowed as the pandemic hopefully winds down. After the conferences next week, he said surveys will go out to all graduating seniors on what they would like before any plans are finalized.

As for field trip refunds, he said most parent-paid money was being refunded and that the system is awaiting guidance from the Tennessee School Boards Association and Comptroller of the Treasury Office on refunding money to booster organizations and clubs.

The board also voted 7-0 to approve TSBA-recommended policies and a resolution to change rules because of the pandemic, including a reduction in credits required for graduation down to 24 for a county diploma and 20 for a state diploma, no ACT or SAT required for graduation, no end-of-course tests for TCAPs required and grades being held no lower than they were March 20.

The board voted 6-1, with Jane Thomas casting the lone no vote, to approve the adoption of Aspire CKLA or Common Knowledge Language arts curriculum for elementary and middle schools and Pearson for high schools.

Teachers and administrators who served on texbook adoption committees gave glowing reviews of the adopted programs, which the communities approved unanimously, although Thomas said she had issues with CKLA disparaging religion and U.S. culture in addressing social issues.

For the first time, the public viewing of the proposed texts was done online over four days, Monday through Wednesday, instead of in person over a few hours at the Akard Service Center near Bristol. School system officials reported two responses from one person over the three days, compared to 10 last year when social studies texts were on display at the Akard center.

“This is Sullivan County. This is not New York or California,” Thomas said, adding that she prays the decision will help students into higher thinking and morality as well as better reading and writing skills.