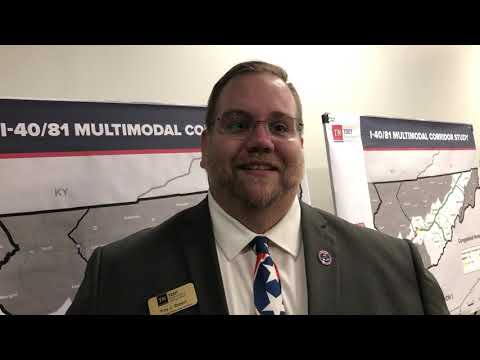 BLOUNTVILLE — Have you got concerns or suggestions about the more than 500 miles of the Interstates 40/81 corridor through Tennessee, specifically I-81 in East Tennessee and the I-26/I-81 interchange that is the most congested section of I-81 in Northeast Tennessee?

Tennessee Department of Transportation officials want to hear from you, even if you couldn’t make it to a meeting on the matter here Thursday because of the flu, flooding or Gov. Bill Lee’s visit to Johnson City.

The I-40/81 Multimodal Corridor Study is underway and kicked off statewide with a meeting at Northeast State Community College on Thursday night. Troy J. Ebbert, planning supervisor in the Office of Community Transportation for TDOT, said the once-per-decade meetings get input on the interstates and their access.

“We need to know what’s wrong with it, what’s broke so we can fix it,” said Ebbert, who is based in Knoxville.

HOW CAN YOU TAKE THE SURVEY, WHAT GOOD COULD IT DO?

Ebbert said the last corridor study done 10 years ago resulted in the third tractor-trailer passing lane on the uphill section of I-81 leading to Exit 63, the exit for Northeast State and Tri-Cities Airport. It was completed last year.

Ebbert said normally such meetings draw about 60 people, but the one Thursday drew about 20 to the Basler Library at Northeast State, which because of flooding closed early, meaning those who attended had to exit the room through what was usually an emergency exit. Many in the audience were transportation officials from the Tri-Cities.

Jeanne Stevens and Emery Hartz held the meeting at Northeast. They are employees of WSP, a firm TDOT hired to do the sessions, the next of which will be Feb. 20 at the Cedar Bluff Library in Knox County. Stevens said the meeting was scheduled on a Thursday evening so state lawmakers would be available because the week’s session was over in Nashville, but most state lawmakers were in Johnson City where Lee gave a regional State of the State presentation. In addition to flooding, flu and other illness has also lead to school closings and hospitals and doctor’s office full of sick folks, which also could have hurt attendance.

Ebbert said common complaints or concerns about interstate are problems with off ramps, sections that need widening and unsafe situations.

Stevens and Ebbert said the second series of meetings, which will present findings and draft recommendations from the feedback received at the meetings and via the online survey, will be held later this year.

“We will have a second round in the fall when the draft study is ready,” Stevens said. She said safety and freight are other areas addressed, and pointed out that the SmartWay program, which includes real-time video feeds available online, soon will be available on I-81 from its intersection with I-26 to the Virginia line.

The most congested interstate section in Tennessee, Ebbert said, is the section of I-40 that also overlaps with I-75 in Knoxville. He said that section has more than 500 lost driver hours a day, the highest level TDOT tracks.