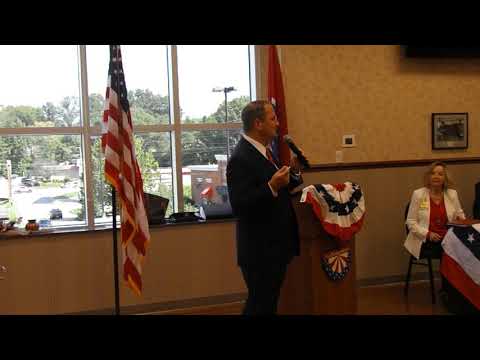 
What's on the line in the November General Election?

KINGSPORT — Control of Congress. President Donald Trump’s possible impeachment. The next occupant of the governor’s office in Nashville.

Golden was in the area for Trump’s Johnson City rally and to rally Republicans amid the sexual assault allegations against Supreme Court nominee Brett Kavanaugh.

“It is a really big deal when the president comes to town,” Golden noted. “You watch six hours of that (Kavanaugh Senate hearing) and you absolutely know what we’re doing and why we go to these meetings. It is important for the future of this country, for people like Brett Kavanaugh … the Donald Trump agenda and what Republicans are trying to achieve. It is absolutely vital.”

In its general election effort, the Tennessee Republican Party has established 20-25 headquarters across the state, knocked on more than 655,000 doors and made 1.2 million phone calls, Golden pointed out.

“(Political) signs don’t vote, but your neighbor wants to see a sign in your yard,” Golden stressed. “If they understand what’s at stake that you care … you’re telling them that this election matters.”

“I know he says he doesn’t … (but) there won’t be anyone to run against Chuck Schumer,” Golden said.

Lee took the GOP gubernatorial primary after a tractor tour, faith tour and town hall tour of the state.

“We knew that if people could meet Bill, they would vote for him,” Devaney said. “I think one thing that really helped Bill from the get-go was he wanted to run a positive campaign.”

Lee, a Williamson County businessman and cattle farmer, will debate Democratic nominee Karl Dean in Kingsport on Oct. 9 at 7 p.m. at the Eastman Employee Center.

“He’s a formidable opponent,” Devaney said of Dean, a former Nashville mayor. “We’re matching him on television. … We’re not taking anything for granted.”