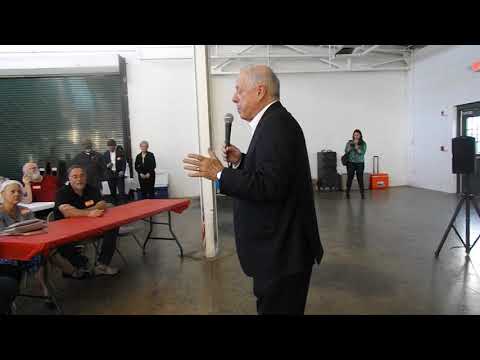 He talked about it during a “Friendraiser” event at the Kingsport Farmers Market, where he served chili to supporters and tried to get them fired up about his contentious race with Republican Marsha Blackburn to fill the seat held by retiring Republican Bob Corker.

“It’s a new aspect of politics than when I’ve run before … obviously a lot has changed,” Bredesen, Tennessee’s former governor, said of the groups. “I don’t think it’s useful or helpful. It’s almost always negative campaigning. It helps to decrease confidence in their elected officials. I would love to find a way to make it at least more accountable … and who’s behind it. It’s one of the things I have to endure here. There are six separate organizations on the other side that are putting dark money into it. There’s still four weeks to go. There will be a lot more (ads) before it is over.”

“Governor Bredesen has been a steady and constant presence in Tennessee for decades now. … He led this state with a steady hand through good times and bad,” she told Bredesen supporters at the event.

“I would love for me to say to you that if you vote for me and I get elected, I will go to Washington and sun will rain down on the Capitol. … I know that’s not going to happen,” Bredesen told the group. “It’s going to be a very close race. This is a state that Donald Trump won by 26 points that was third in the nation in terms of how well he did here. … It was a pretty deep well for me to climb out of before being competitive, but I feel good about where we are. … In the end, it’s going to come down to (voter) turnout.”

What did you think about a Project Veritas video critical of your decision to say you would have voted for Supreme Court Judge Brett Kavanaugh’s nomination?

“It wasn’t our campaign,” Bredesen responded.

According to Tennessee Victory 2018, the coordinated campaign of the Tennessee Democratic Party, a fake volunteer made the video.

“This fake volunteer used secret video recording equipment to capture uninformed and speculative comments made last weekend by college students and youth organizers that were upset by Governor Bredesen’s statement that he would have voted for the nomination of Judge Brett Kavanaugh,” campaign spokesman Mark Brown said in an email. “In retrospect, we now know that this fake volunteer was a spy embedded in Tennessee Victory 2018 by Project Veritas.”

Politico is reporting you are losing campaign volunteers because of your Kavanaugh decision. Is that true?

“They found five of them and all of them are coming back. … On the Kavanaugh thing, there was no right answer on that … half of the people are going to be mad at you and the other half happy with you,” Bredesen said. “There certainly were some women concerned about it … we’ve got like 4,000 volunteers.  … It was a very emotional time for everybody.”

What’s this about former New York Mayor Michael Bloomberg doing a fundraiser for you?

“It’s done. … He offered to do that and I accepted. … I got to know him slightly when I was governor,” Bredesen responded.

Is the endorsement from entertainer Taylor Swift helping you?

“I don’t have any objective evidence to give you. … Certainly it has helped with voter registration. I can see that. … We had nothing to do it,” Bredesen stressed. “It was a complete surprise to the campaign. When I first heard about it, I didn’t realize she had not said anything politically before. … It turned out to be a much bigger story than I thought it was going to be. … It helps with legitimacy with young people. … she has twice the number of (social media) followers than the president has.”