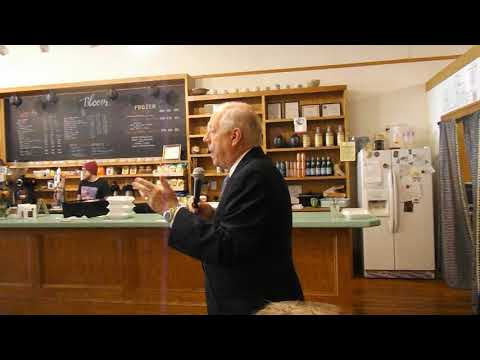 It’s hard to tell at this point, Bredesen said before a Wednesday Bristol Chamber-hosted roundtable discussion and meet-and-greet held just steps from historic State Street at the Bloom Café and Listening Room.

“There’s been a very heavy early vote in urban areas, and I think those are good for me, (but) it’s hard to interpret,” said Bredesen, Tennessee’s former two-term governor and Nashville’s former mayor.

Bredesen and Blackburn are locked into a contentious battle featuring negative ads by both of them and third party advocacy groups, in addition to trackers showing up at Bredesen campaign events, although none came to his Bristol stop.

“They basically hire people to come and expect me to leap up and say something to them. … They shout something at me … like, ‘Why do you lie to people?’ ” Bredesen said of the tactics. “I think it’s more intimidation than anything else.”

Bredesen, 74, used the chamber event to roll out one of his so-called “big ideas,” including a plan to roll back high drug prices.

What would be your solution for the migrant caravan of immigrants wanting to cross the southern border?

“I really do believe we need to control our borders. I sent troops to the border back when I was governor. … We’ve not done such a great job of patrolling the border in the past. This is an opportunity to show we know how to do this in a way that is adult and effective and respectful of the people who are trying to cross. … If someone is seeking asylum, there is a process for them to do that.”

What should be the congressional response to Saudi Arabia for the murder of journalist Jamal Khashoggi?

“I think the response ought to be pretty strong. He was living in America and working for an American newspaper.”

What would change in Washington if you are elected?

“I wish I could tell you that if you elect me, I will go to Washington and the clouds will part, and a ray of sun will come out over the Capitol, but I know that’s not the case. But I don’t know how to deal with something like this other than to be one more voice … and trying to put an oar in the water and bring other people along.”

How close is the campaign between you and Congressman Blackburn?

“I feel good about where I am but lots of things could happen in the meantime. I’m proud of the campaign we’ve run. I like the kinds of ads I’ve been putting on the TV. … I’m certainly hoping for and expecting a good result.”