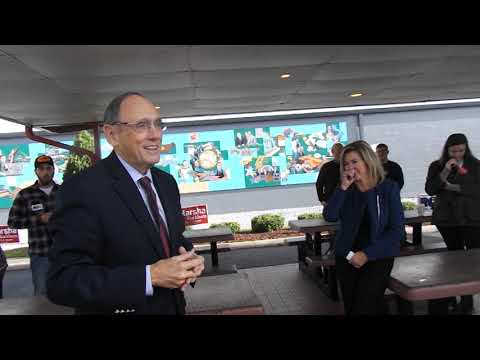 
Blackburn: 'When the blue wave gets to the Tennessee state line, it is crashing into the great red wall'

If you entered the location and said you were there to support Blackburn, the campaign picked up the tab for the order.

“We’re going to win this. … I will be your U.S. senator,” Blackburn declared. “(Republican gubernatorial nominee) Bill Lee is going to be your governor. We’re going to keep these super majorities in the state House and state Senate. We’re going to hold all our seats in Congress, and we are going to continue to work on (President) Donald Trump’s agenda and get this country back on track.”

Bredesen hosted six “get out the vote” events throughout Tennessee on Monday as he made his closing pitch for why he’s ready to be the state’s next U.S. senator.

“For the past 11 months, Tennesseans have been hearing me say I’m applying for the job,” Bredesen, Tennessee’s former governor, said. “Now, I’m asking voters to hire me. If you want results and a U.S. senator who has a track record of getting things done for Tennessee, I’m ready to get to work.”

“They said they had to spend $50 million on this race. … Their path to the Senate majority runs through Tennessee. … When the blue wave gets to the Tennessee state line, it is crashing into the great red wall,” Blackburn noted.

Blackburn, a Middle Tennessee congresswoman, pledged she will be for more constitutional judges, tax cuts and building the wall to secure the southern border.

“There are vast differences between my opponent and me,” she said. “We need every single vote. … We know that the media and the money has been with Bredesen through this entire race. We’ve got the people, the policies and the prayers that are with us.”

When asked if she stands with President Trump’s call to end birthright citizenship, Blackburn responded: “It will be something Congress will look at.”

U.S. Rep. Phil Roe, R-Tenn., introduced Blackburn at the rally and predicted that control of the U.S. House is going to be “very close” after Election Day.

“My prediction is you can look at four states … Maine, New York, New Jersey and Pennsylvania,” Roe stressed. “If we come out of there with a negative five (seats), we’re probably going to hold the House. If we come out and lose seven or eight seats, we’re in trouble. We know literally what will happen if we lose the House.”

Roe cited economic data as to why the midterm elections are important.

Trump has stumped for Blackburn at least three times during her campaign, including Sunday night in Chattanooga.

Blackburn, when asked to reflect on her campaign, with millions of dollars being spent by both sides on negative ads, she concluded: “We know tomorrow’s going to be a good day.”